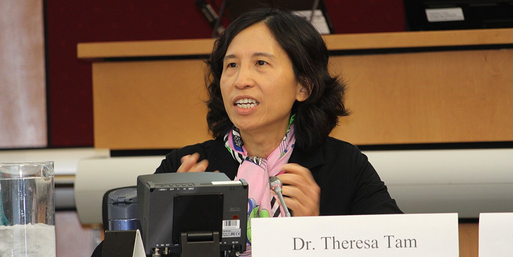 Home In the News Top doc weighs in on mandatory vaccinations, outbreaks
In the News

In an interview with Brunswick News, Chief Public Health Officer of Canada Dr. Theresa Tam said stopping the spread of measles and whooping cough may be boosted more effectively by using other means.

The comments come amid a measles and whooping cough outbreak and as New Brunswick’s Tory government is moving to tighten vaccination rules for young students.

Dominic Cardy, the minister of education and early childhood development, introduced a bill earlier this month that would prevent children from attending daycares and public schools if they have not completed their immunizations, unless they can provide a signed exemption for medical reasons.

Cardy told Brunswick News on Friday he stands by the mandatory approach.

“We’re talking about kids being exposed to fatal diseases and that’s my concern,” he said. “I’m not interested in seeing children in New Brunswick die from measles or other easily preventable diseases.

“Making anything mandatory, any limitations to the freedom of individuals, is serious,” Cardy said. “But in this case I think it’s warranted because we’re talking about the freedom of other people being infringed.”

Cardy said his legislative efforts have in fact served as public education that has already led to a “strong uptick” in the number of people getting their kids vaccinated.

The debate comes in the aftermath of 12 confirmed cases of measles in the Saint John region.An outbreak of whooping cough, also known as pertussis, has also been declared at a Fredericton school.

“From a New Brunswick perspective, I think it’s very worthwhile to dig a bit deeper into some of the underlying reasons,” Tam said.

The country’s top doctor said there could be several reasons why some New Brunswickers aren’t getting vaccinated.

That includes complacency, specifically in younger generations that have grown up without the threat of the spread of vaccine-preventable diseases and therefore haven’t prioritized the need to get vaccinated.

Tam said a lack of convenience could also stand in the way, with immunizations not readily available or being widely offered.Meanwhile, some people don’t have confidence in vaccines and therefore question their importance, she said.

“If you think about the reasons why people don’t get vaccinated, it may be that mandatory vaccination is not actually going to be that effective in boosting the coverage,” Tam said. “The fundamental underlying reason isn’t because parents don’t want their child to get the vaccine.

“It’s a provincial decision, but mandatory vaccination does not address the root causes.”She added: “It’s definitely not the only solution and you have to change social norms in other ways.”

Tam said the language surrounding vaccines is important as well.

“‘Mandatory’ is a divisive word,” she said. “If you’re trying to bring you community along to trust the credible science, to trust public health and to trust government, ‘mandatory’ alienates people and could potentially backfire.”

In a separate interview, New Brunswick MP and federal Health Minister Ginette Petitpas Taylor said she turned to Dr. Tam with questions about whether governments should look at mandating vaccinations.

“If people are hesitant and from there we mandate them to do something, we’re not providing them the information to make that decision on their own. If someone is hesitant and all of a sudden we say ‘you have to do this,’ they’re not going to be more sure of the decision that they’re making.”

Tam said the measles outbreak in the province could prove to be a “best-case scenario,” with the outbreak bringing about a new awareness and a tangible reason for New Brunswickers to react.

Tam said that the uptake for the measles vaccine in New Brunswick is higher than the national average.

For the province, it’s 92 per cent, whereas it’s 90 per cent across the country.

“In a fairly sizable community, 12 (confirmed cases) is not an unexpected number for such a contagious virus,” Tam said.

“What that tells me is that there is an actual firewall being built and that the spread hasn’t continued.

“That might be the best-case scenario in the presence of one of the most contagious diseases we know of on earth.”

But for whooping cough, the uptake isn’t as nearly as high.About 75 per cent of New Brunswickers have their whooping cough vaccinations, roughly the national average.

The data comes from national immunization coverage surveys conducted every two years by a research firm on behalf of Public Health Agency of Canada that estimates vaccination coverage.

Uptake for the adolescent booster of the vaccine is also low, Tam said.

“Part of the issue is that people haven’t seen the diseases and are complacent,” she said.

She said physicians should be routinely asking patients if their vaccinations are up to date.

“Educating kids in schools would be perfect in some ways because these outbreaks are occurring in school,” Tam said.

Specific to whooping cough, there should be an added focus on vaccinating pregnant women between 27 and 32 weeks to in turn protect infants.

“The whole concept behind pertussis immunization is to protect infants who get really sick and may die from it,” Tam said.

“Vaccinating people around those babies is a very key aspect of the strategy.”

Health care and the laws regulating it are explicitly the responsibility of the provinces, she said.

Meanwhile, the federal government plays a role in educating the provinces and the Canadian public as a whole. Tam said her office is currently trying to counteract misinformation on vaccines and is working with Twitter, Facebook and YouTube in order to ensure accurate information is readily available.