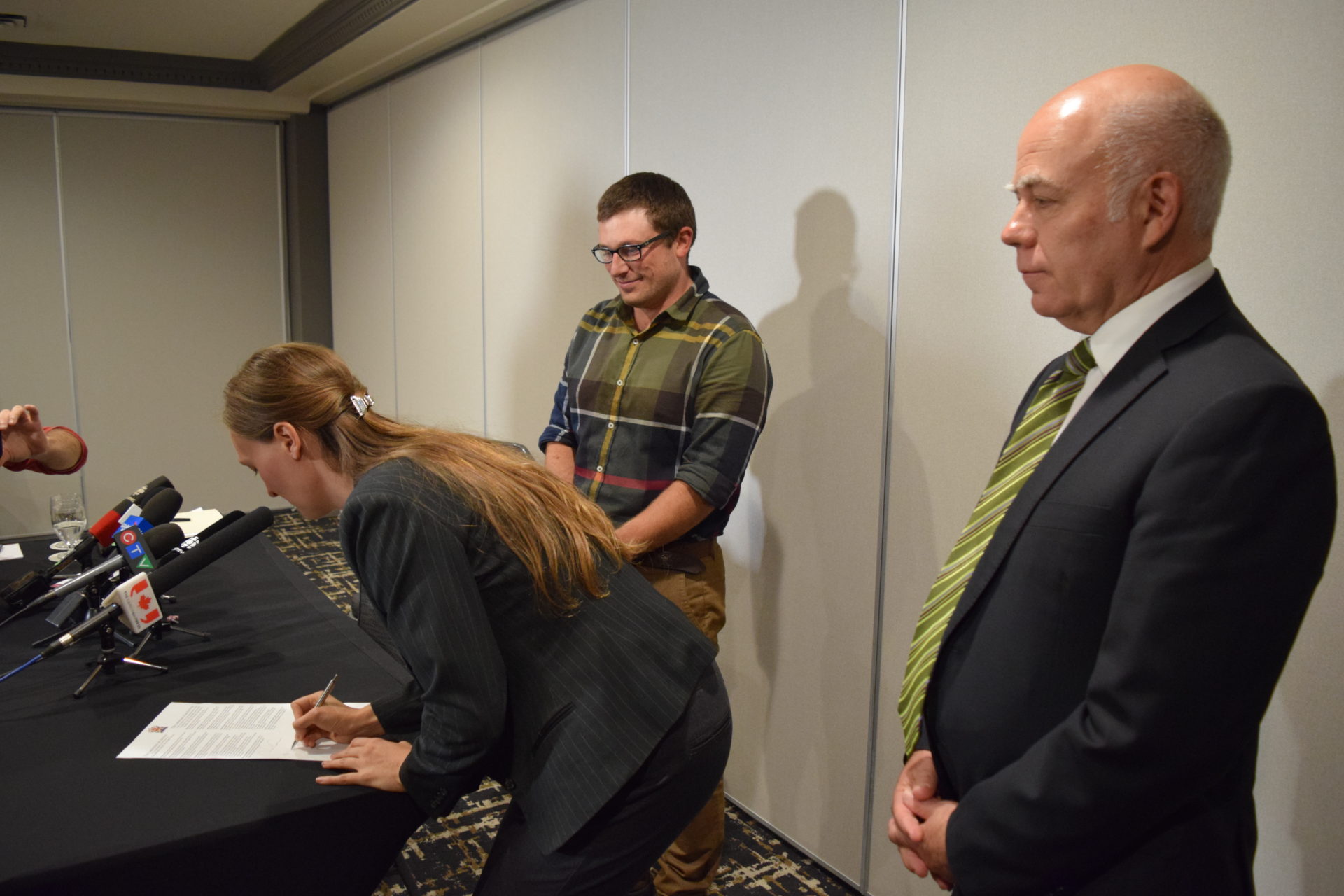 Home David No deal: Green Party won’t formally side with Liberals or PCs in N.B. – CBC
DavidGovernanceIn the NewsKevinLegislative OfficeMegan

No deal: Green Party won’t formally side with Liberals or PCs in N.B. – CBC

“We all want the citizens of the province to be the winners. And for them to be winners, we need to be able to collaborate in the house across party lines.” – David Coon

Green Party leader announces a ‘declaration of intent’ he hopes MLAs from other parties will sign.
New Brunswick’s Green Party will not sign a formal agreement with any political party to support a minority government, the three Green MLAs announced Wednesday.

Instead, the Green members will base their votes in the legislature on a “declaration of intent” to tackle fiscal and environmental challenges and to respect language and Indigenous rights.
And they say they’ll base their first major decision — whether to topple Premier Brian Gallant’s Liberal government by voting against its throne speech — on what the speech says.

“We’ll have different takes on what we see in there,” said Kent North MLA Kevin Arseneau, who also said he’ll base his decision on the contents.

“I can’t decide how to vote until I have actually seen what’s in the throne speech,” she said.

No guarantee for Gallant
The decision means Gallant will head into the first session of the legislature Oct. 23 with no guarantee his government can survive.

The Sept. 24 election saw Gallant’s Liberals win 21 seats, four short of a majority and one fewer than the Progressive Conservatives.

PC Leader Blaine Higgs has been pressuring Gallant to give up power based on the seat count.

But Gallant says he plans to try to hold on persuading at least one other party to vote for Liberal legislation.

The premier announced Wednesday the new legislature will sit Oct. 23, with a throne speech expected that day. Under normal house procedure, a vote by MLAs on whether to endorse the speech would likely happen Nov. 2.

The Greens are inviting all parties to sign their declaration of intent, which commits MLAs to find “common ground that reflects the foundational principles” of New Brunswick, including respect for aboriginal and treaty rights as well as for bilingualism and dual education systems.

It also says MLAs should commit to fighting poverty and “fiscal and ecological debts” and to respecting the autonomy of the legislature.

Liberals would sign declaration
Gallant said Wednesday his Liberal caucus had agreed unanimously to sign the Green declaration, and if the Greens in turn support a Liberal throne speech along those lines, “we believe we have a clear path to earn at least 24 votes.”

He said that would beat the PCs’ “blatant attempt to try to seize power” with just 22 seats.

Gallant’s 24-22 math contradicts his earlier accusations that the PCs and the People’s Alliance had made a deal to put together a bare majority of 25 in the 49-member house.

Now Gallant says Higgs is pretending to have no deal with the Alliance because some members of his caucus are against the idea.

The combined Liberal and Green numbers would still be one short of a majority, but Gallant said he hopes that a “progressive” member of the PC caucus who wants to block Tory co-operation with the Alliance will agree to vote with the Liberals or become Speaker.

Higgs was not available to comment on Wednesday’s developments.

Coon said the Green approach respects the outcome of the election, in which neither traditional party won a majority and two newer parties, the Greens and the People’s Alliance, captured three seats each.

“No one won this election,” he said. “We all want the citizens of the province to be the winners. And for them to be winners, we need to be able to collaborate in the house across party lines.”