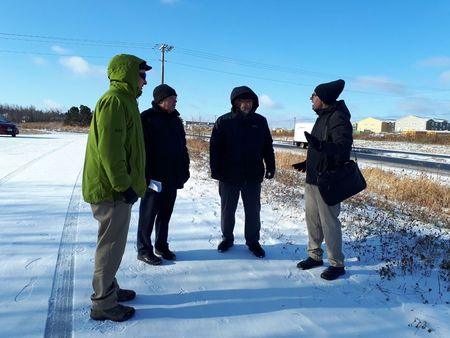 On November 13, 2019, I took the Minister of the Department of Transportation and Infrastructure, Bill Oliver, on a tour of the riding to highlight the infrastructural needs and requests of our community.

Our first stop was the Centennial Building, which had become an eyesore when, as part of their debt reduction strategy, the government halted construction on an addition that was to serve as our new courthouse.  What was left was a messy, empty lot and an open scar on the back of the building where the old southern wing had been torn off. I had been urging Minister Oliver to grass over the lot and cover the back of the building until its future was decided and had met with the Premier to discuss renovating what remained of the building.  Since then, the building has been sold to a private company, Centennial Heritage Properties Inc, which plans to convert it to residential, hotel and restaurant space.

Our next stop was the old Mack Truck lot off Route 8 beside Skyline Acres. A local citizens committee has been working hard to build support for an Active Transportation Hub at this location, featuring a pedestrian crossing over Route 8, a trail hub for bikes and pedestrians with bike rentals, a park-n-ride with spillover parking for UNB, and an express bus to downtown.  At this stop we met with local resident and committee member Trevor Hanson and Councillor Greg Ericson. Trevor shared with Minister Oliver the committee’s vision for a hub to facilitate alternative transportation by bus, foot or bike which would reduce parking congestion both downtown and on the campuses.  Minister Oliver expressed interest, as there are federal infrastructure funds for active transportation projects such as this one, but noted there would a cost to create a new entrance and exit from Route 8 to access a parking lot.

The project has gone through a technical feasibility study by the City. It has gained support from nearby institutions, including UNB, the hospital, the high schools, and the Skyline Acres community. For more on the Active Transportation Hub click here.

It was just over 13 years ago that a young co-worker of mine, Leslie Bruce, died crossing Route 8 at this location. I would love to see the pedway named in her memory.

Given the massive flooding we have seen in the past two years, I drove the Minister to the areas where the worst flooding occurs and where provincial roads need to be raised.

Many of the major roads in Fredericton are provincially-owned.  We drove along the Lincoln road so I could point out the dangerous lack of a sidewalk from Dunn’s Crossing to the Mosque.  Many families with children in tow walk to the Mosque for evening prayers: it is extremely dangerous for them to be walking along the narrow shoulder in the dark.

Our last stop was Simms Home Hardware on King St, owned by Judy and John Burgess. The construction of the traffic circle at King and Smythe had almost completely closed traffic to their business, which undoubtedly reduced their number of customers.  I made the point that government should take  responsibility, when funding new infrastructure, to provide some financial relief to those negatively affected during construction. Large industry can have  their property assessments lowered when they are experiencing a down-turn in their export market.  Why are small businesses left out in the cold when their market temporarily shrinks during the construction of public infrastructure?

I felt confident that, by the end of the tour, Minister Oliver had a good picture of some of the infrastructure needs for Fredericton South, as well as some exciting potential projects. I appreciate the time he took to visit the riding with me, and look forward to showing him around again next year.