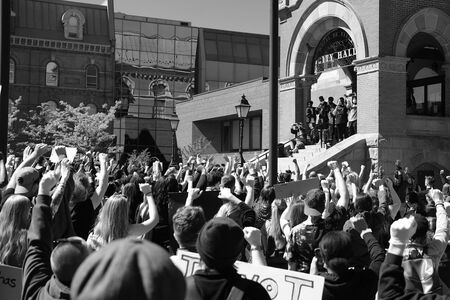 February is Black History Month. While we remember and recognize the people and events of the past, history unfolds today and the events of today will no doubt be part of future Black History Months. What is happening in North America with the Black Lives Matter (BLM) movement is history in the making.

After the killing of George Floyd last spring, the BLM movement exploded across North America and the world. Mr. Floyd’s death was the final straw. The outrage of witnessing another black person killed by a police officer catalyzed millions across the world to join in solidarity with marchers in cities across the US.

In Fredericton, supporters of BLM were galvanized within a matter of days to gather in front of City Hall, led by an emerging group of young black activists and leaders. I was there that day and took a knee along with hundreds of my fellow Frederictonians. We joined with millions around the world who bent a knee to take a stand against the deadly and racist violence that has been meted out against black people for far too long. For those of us who are white, there is a place for us in this movement as allies. If we stay silent, we are complicit. It is not enough to not be racist, we must be actively anti-racist.

In that spirit, my caucus and I have called on Premier Higgs to implement the requests of Black Lives Matter New Brunswick, to commission independent research on the personal, social, and economic impacts of racism and implement an anti-racist strategy, as well as to incorporate black history into the public school curriculum.

I recently found a white supremacist sticker stuck to my Constituency Office window downtown. Turning a blind eye to racism, pretending it is not a problem, only emboldens white supremacists and racists to believe that they can act with impunity. Everyone can be an ally in the fight against racism. It just takes resolve.