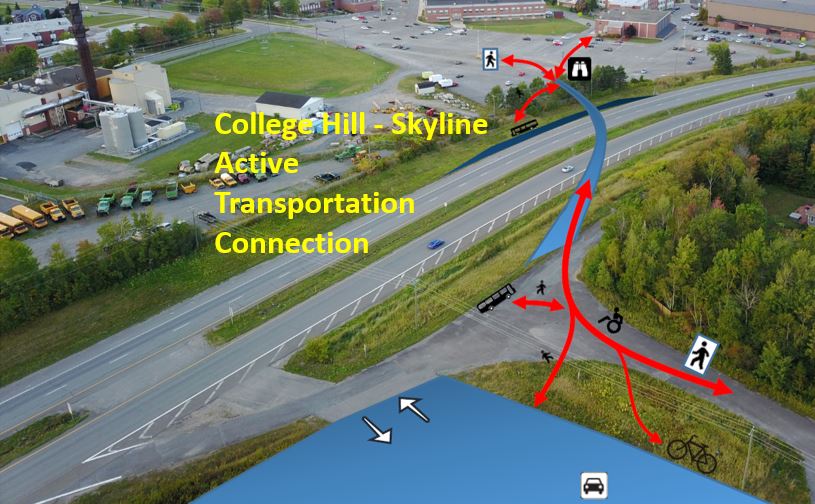 Prepared by: Citizens for a College Hill-Skyline Active Transportation Connection

The idea of a College Hill Skyline Active Transportation Connection is probably 40 years in the making, but following the City Transportation Committee meeting on December 17th, 2019, the idea took one more small step forward.

Over the last four years, a number of interested citizens in the Skyline Acres neighbourhood of Fredericton have been working towards seeing an accessible pedestrian and cycle crossing between their neighbourhood and College Hill over Route 8 near the Aitken Centre.

The Citizens Committee (including participation from Councillor Greg Ericson and MLA David Coon with support from Taeyon Kim) has developed more than just a crossing, but a vision for an “hub” of Active Transportation connections, including trails, cycling, transit, and parking (so people can park and walk/cycle/wheel to their College Hill destination or take transit).  The hope is that the larger vision for this will help change how we travel in Fredericton, making Active Transportation a more realistic option.

The feasibility study included a preliminary bridge alignment (designed for wheelchair accessibility) and also looked at all the elements of the plan, including the transit and park and ride, as well as some base costs for the structure.  The presentation covered information about the cost (at least $2.5 million plus tax for the bridge, though really good points were made about this being an investment and the potential for cost sharing among different levels of government) and the park and ride site (described by the transit consultant as a “poor” location for that purpose given other available locations) though some committee members felt it could still address College Hill parking issues. While further discussions would need to happen with NBDTI on the various detailed aspects of the plan that impact it, some of the Citizens Committee were able to introduce the vision directly to Minister of Transportation and Infrastructure Bill Oliver during an on-site visit hosted by MLA David Coon on November 13th, 2019.

There still appears interest at the Transportation Committee to continue moving the project forward and the Citizens Committee felt the presentation helped to answer some important questions.  There are still many steps that remain before there can be a concrete decision on the project one way or the other, but there’s progress.

In terms of next steps, the Citizens Committee hopes that the City can move this project forward by looking at detailed design work for the feasible elements of the plan and initiating discussions with NBDTI.  Ideally, a complete plan may permit the forging of multilevel funding partnerships and make this an achievable project.

For updates by the Citizens Committee, find us on Facebook.