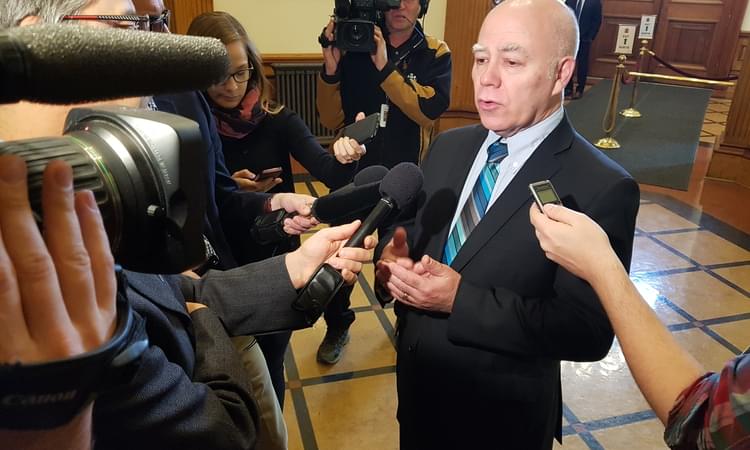 Home David Leader’s Statement: Why I abstained on Bill 11
DavidFeatured

Leader’s Statement: Why I abstained on Bill 11

When the bill to eliminate a parental exemption from our mandatory vaccination laws first came forward a year ago, I assumed the exemption was being used to the extent that it was driving vaccination rates down in our schools, creating a public health problem.  I planned to vote in favour of the bill.

Our mandatory vaccination legislation was passed in 1982 with provisions for parental exemptions for medical or philosophical reasons.  It has served our children well for the past 38 years, so I imagined something had changed, necessitating the amendment.  The evidence would be forthcoming.  It never did.  I imagined the Chief Medial Officer of Health, or her regional medical officers of health, or the provincial epidemiologist would be publicly throwing their support behind the Education Minster’s bill.  They never did.

When the bill reached committee stage, where MLAs examine bills in detail, question the Minister, and propose amendments, no evidence was actually presented that there was a public health problem the bill was intended to solve.  To my great surprise, the Minster of Education said repeatedly that the bill was not about public health.  “The bill is not about New Brunswick’s current vaccination rates in public schools.  It never has been,” said Minister Cardy.

In fact, he revealed that the data in his possession indicated only 1 percent of parents were using the medical and philosophical exemptions combined.  Further, he said he had no idea of what proportion of those parents had sought the medical exemption versus the philosophical exemption.  And he acknowledged that herd immunity continues to be achieved in our schools.  That is the vaccination rate needed to provide indirect protection to those who are not immunized.

Why not vote for the bill anyway? The consequence of eliminating the parental exemption is that some students would be denied the right to a public education and exiled from their schoolmates.  To justify such radical action, a greater good must be served.  But in the absence of any evidence that this was the case, and the Minister’s repeated assertion that this bill was not about public health, how do you justify denying some students their right to a pubic education?  This was my concern.

Voting against the bill was not an option, because it would give oxygen to the anti-vaxxers, and our caucus didn’t want to give the impression that we were opposed to removing the exemption if warranted.  We are not.

Abstaining from the vote, and explaining why we did so, was not the politically wise choice; however, my caucus colleagues and I saw it as our only choice. I could have played it safe and held my note to cast a yes vote, but the bill was flawed, and I didn’t seek public office to play politics.

I had attempted to amend the bill, so that the parental exemption could be eliminated by the Chief Medial Officer of Health when she deemed it necessary to do so from a public health perspective.  However, the amendment was not adopted at committee.  Had it been adopted, the bill would have passed.

Minister Cardy and the Liberal leader Mr. Vickers have had a field day attacking our caucus after the bill was voted down.  It’s an old trick.  Perhaps if contempt is poured on the Greens, people wouldn’t notice that Minister Cardy failed to get five of his cabinet colleagues on-side, and that a majority of Mr. Vickers’ members voted against the bill.

I would like to see an automatic reminder system put in place for parents, so they don’t lose track of the vaccination schedule for their children. Vaccination clinics in the schools and after hours would make it far easier for parents to make sure your children are vaccinated when they should be.

As for the parental exemption, government should bring back a bill to the House that says the Minister may suspend or eliminate the parental exemption on the advice of the Chief Medical Officer of Health. I would support such a bill, and I believe my caucus colleagues and a number of those MLAs who chose to vote against Bill 11, would do so as well.