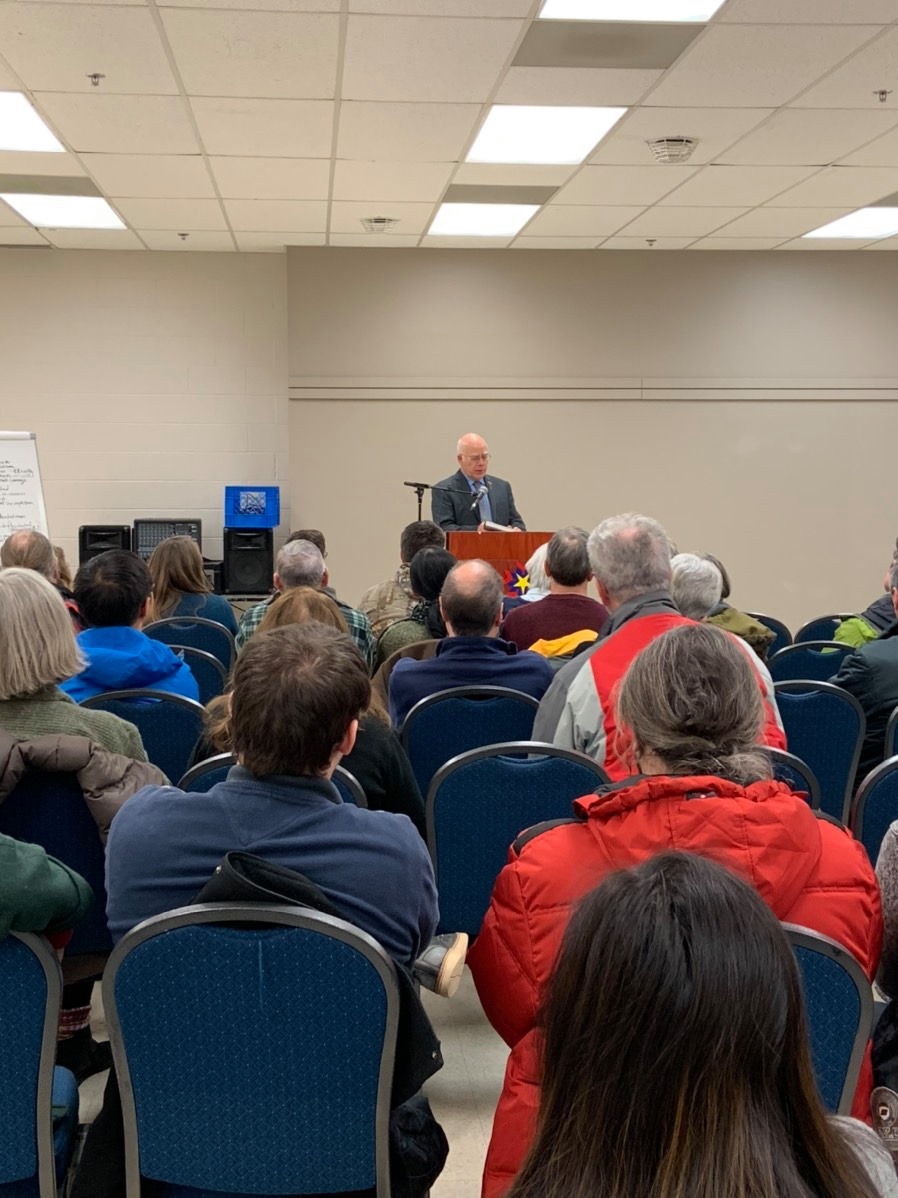 In his role as an opposition party leader and member of the Green caucus in the New Brunswick Legislative Assembly, David Coon held forums in 14 communities around the province to hear about the priorities New Brunswickers have for the 2020-2021 provincial budget.  The results of what was heard are consolidated here and formed Mr. Coon’s submission to Finance Minister Ernie Steeves budget consultation.  Copies were distributed to all those who provided their e-mails at the 14 tour stops, and the document can be viewed at www.greencaucusvert.ca.

Government’s role is to protect and empower its citizens, and the communities to which they belong.  Therefore, Mr. Coon believes the well-being of people, starting with children and the most vulnerable, and the well-being of the communities they belong to, must be at the heart of every decision government makes.   Budgets are concrete reflections of a government’s priorities, where a government chooses to allocate funds is a clear indicator of the outcomes it is hoping to achieve.

There was strong interest in seeing a budget which ensures people and families living in poverty have sufficient income to meet their basic living needs.

Suggestions for achieving this included raising the budget for social assistance to reflect the purchasing power lost due to inflation since 2010 for people on the transitional assistance program, and since 2014 for those with designated needs or disabilities.  This would cost $19 million and it was suggested revenue could be earmarked for this purpose from an increase in corporate income taxes.  Harmonizing New Brunswick’s corporate income tax with Nova Scotia’s (14% to 15.25%) would generate an additional $36 million in revenue that would more than offset the $19 million addition to the Social Development budget.

At many stops on the tour, participants proposed that New Brunswick adopt a Basic Income Guarantee, with the support of the federal government, that addresses shelter, food and personal expenses.

Suggestions were also made that public schools should provide two meals a day to students, as many come to school hungry, and lack enough food to eat on the week-ends.

The need for government action to ensure an adequate supply of affordable housing was raised, though there were no specific suggestion how this might be achieved directly.  From a legislative perspective, it was suggested that the Residential Tenancies Act be amended to better protect tenants and give the government the ability to regulate rents.

Mental health care was raised as an area of health care that has been underfunded for a long-time resulting in very long wait lists even for initial consults.  Rapid action is required to provide mental health services to the extremely vulnerable such as LGBTQ youth.  Many people need to talk to someone but can’t wait on a list for 12-18 months.  Increased funding to help lines such as CHIMO would be helpful.  It was suggested there is a need for legislative action to ban conversion therapy.

Clearly there need to be changes in the way primary healthcare is provided because access is difficult.  Participants talked about having to wait 20 to 60 days to get an appointment with their family doctors, so they use the ER at their local hospital.

The most frequent suggestion for this budget was to ensure funding was available to expand the diversity of healthcare practitioners so people are not restricted to a solitary doctor or forced to use ERs to access primary healthcare services.  Suggestion included providing funding to cover the primary health care services that can be provided by pharmacists, nurse practitioners, and midwives (to which people wanted access to beyond the Fredericton-region).

Eliminating access to acute health care services and limiting the availability of emergency care for New Brunswick towns and surrounding rural communities was roundly condemned by many, and the resulting increase in demand for paramedics, inter-hospital transfers, and for acute health services in city hospitals was seen as unworkable given current shortages and wait-times.  Townspeople, rural folk, and their health care providers saw this plan as unsafe and unjust.  Some city dweller feared this would only make a bad situation worse in their hospitals as they try to absorb so many more patients from distant communities.  Nurses who had the opportunity to work in adjacent communities rather than transferring to more distant regional hospitals, as anticipated by the plan, would seek employment in places such as Houlton, Maine and Amherst, Nova Scotia or move out of nursing altogether.

It was suggested that nurse recruitment could be enhanced if free tuition was available to nursing students.  Generally, it was said that wages need to improve for care workers and caring for people needs to be regarded as an investment, not a cost.

The budget needs to provide greater access to home care for seniors.

The revenue from federal health care transfers must be based on need, such as demographics, not GDP growth and per capita formulas.

The view was widespread that large corporations operating in New Brunswick are not paying their fair share in corporate income and property taxes, with corporate income taxes representing only 5.5 percent of provincial revenues, and regional hospitals paying more property tax than Canada’s largest oil refinery.  In addition to relatively low tax rate, there was real concerns that tax breaks and tax havens are diverting significant revenues needed to improve essential public services.

With respect to taxes on non-owner-occupied buildings, there were divergent opinions with some saying we need the $40 million in revenue gained from these property taxes, while small building owners said their apartments needed to be treated like owner-occupied buildings by the property tax system so they can afford to operate and maintain their apartments.

There was no dispute that we are not receiving the royalties we should from the timber we sell to the companies holding Crown land licenses, and this was heard in nearly all of the communities

There were frequent demands that the budget put a priority on climate action with greater support for improving the energy efficiency of home and buildings, in adopting more renewable sources of power, in getting electric vehicles on the road, and improving both transit, and public transportation between communities (including the existing rail service).  It was clear that people wanted this priority to be reflected in the budget in a meaningful way.

No opposition was raised with regards to the carbon tax, but many were concerned as to how the money in the Climate Change Fund was going to be spent to effectively help New Brunswickers respond to the climate crisis.

There was a sense of urgency around budgeting to help communities and households adapt to the consequences of a rapidly changing climate.  Protection against flooding was identified as a priority and the essential role of community-led action was highlighted.

Residents of northern and rural communities, at best, feel abandoned by Fredericton, and at worst, they feel under attack as their public services and social infrastructure are reduced. The feeling is that “Fredericton” know best and that decisions that work for the capital region are imposed on other communities without an understanding of the local needs.

“Communities are no longer empowered, they sucked the life out of them when they moved all the decision-making to Fredericton.”

“Government goes out of its way to make people feel inferior so they won’t stand up and speak out.”

“We embrace change in this community, but it needs to actually solve the problems in the community.”

“What’s going on in New Brunswick is almost a willful denial of our rural reality.”

The provision of community development workers was suggested, but a number of participants talked about good innovative ideas for development in their communities being blocked in Fredericton.  The pervasive question in the North was why Fredericton doesn’t invest in the Restigouche-Chaleur region.  The suggestion was made a number of times that there needed to be accessible and effective community investment funds to support community economic development.

It was frequently suggested that the budget include measures to increase our reliance on local food and expand its production by requiring government institutions such as hospitals and schools to procure local food and support farmers producing for the New Brunswick market.

The budget needs to make multi-year planning possible for the education system.  In particular, funding needs to be in place to fully restore the training in the trades in our high schools.  Funding needs to be included to ensure that students with special needs are provided what they need to reach their full potential.  The centralization of decision-making in amalgamated school districts is sometimes at odds with the interests of local schools.

There was a recognition the unincorporated areas in the province and the system of LSDs associated with them is not working for those communities.  There was also a desire to see consolidation of services among multiple incorporated municipalities adjacent to one another located within small geographic areas.

Municipalization in rural communities would provide access to federal dollars.

The unconditional grant formula is not working for municipalities and needs to be reformed, nor is the division of responsibilities between the municipal and provincial governments working effectively.  There needs to be stable funding for infrastructure across governments.

The budget should not be downloading on municipal governments in the name of greater local autonomy.

The provincial government doesn’t recognize population growth is going on in towns and surrounding rural areas.

Forest Use and Stewardship

Forest resources are locked up by the licensees, denying local entrepreneurs the opportunity to establish local enterprise and no say by the community in how Crown forests are managed despite their role in watershed management.  Spraying and clearcutting are permitted in the drinking water supplies of communities.  Government should have control over Crown lands, not the private sector.  The budget should not fund the spraying of glyphosate.  And many called for increasing stumpage fees so that New Brunswickers will get a fair return for the public resources that are being harvested.

It was frequently mentioned that the Irving family has an unhealthy influence on government and entrepreneurs through their business practices, by virtue of the significant percentage of the provincial economy they control and their persistent lobbying.  While this isn’t a budget matter, there is an overwhelming hunger for government to serve the public good, and not be captured by powerful private interests.